You are here: Home / Mrsrkfj / Chuck is a Selfish Mother Shut Your Mouth 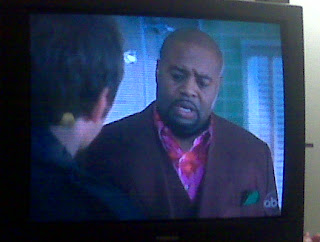 I finally get a chance to catch up on Pushing Daisies. ABC on Wednesday used to be must see tv, now I see shark people. ^^^

What happened to PD? Last year it was so fresh and exciting, innovative. Now, it has the substance of the last Pecan Pie I baked: sweet yet mega gooey.

The show seemed so much better when the gang from the Pie Hole were solving murders and the personal lives were asides. Now there’s this Chuck undeading her dad (hence the selfishness) and Ned not doing mich more than looking like a wounded pup. And what happened to Digsby? Is he a victim of the economic crises? Too expensive for doggie treats?

I am beginning to dislike American Television. Each show follows the same format: a main story and a secondary story and a need to have the characters have some type of screen time (Bob and Lee of DH, Dell from Private Practice to name a few). I need to really start taping more BBC to get a good dose of TV watching (Skins anyone?!)

* wouldn’t Chuck’s father stink and be a hot mess? He was dead and buried for 20 freaking years!!!

* is there like some secret or private entrance to Ned’s apartment? The man is covered in freaking BANDAGES! No one sees this abomination strolling around eating pie?

* I like Detective Olive, but why is she using an order sheet from the Pie Hole to take notes? That’s ghetto.

* is Ned so insecure the best he can do is a chick he can’t touch? Talk about being hard up.

* the historical society chick is trifling. Why does she have glitter, cotton balls, and paper mache paste all over her? Did ya ever hear of soap and water?

That said there were some funny moments tonight.

Like when Emerson and Ned are discussing how to get rid of Chuck’s dad.
Emerson to Ned: trip over an ottoman, then Dick Van Dyke that ass.

And the woman from the historical society who says to Olive about Olive’s never being married:
It is better to have loved than to be you.
What. A. Bitch. Love it.

And Emerson to a singing group:
Shut the accapella up.

It seems confirmed that Pushing Daisies has been cancelled and a comic book will tie up loose ends. I hope its at least a graphic novel then I won’t feel so dorky buying it.

Perhaps ABC will turn it over to Lifetime for a rebirth or at least burn off the last couple of episodes. This show cannot just go like this.