I’m not superstitious.  Really I’m not.  But today has been the mother of bad days.

If I didn’t know better, I’d swear it was a Monday.

We all woke late, but that’s normal for a Friday.  After a long week, we usually drag despite the start of the weekend.  Today, The Teen and The Boy fussed over the bathroom and the furry alarm clocks protested their empty bowls by winding their way through our legs tripping us as we scrambled to get our day going.  I reached for my glasses and they were nowhere to be found.  I prodded the sheets, felt around under the edge of the bed, and Nada.  I stumbled downstairs, made coffee that was more grounds than liquid upper, and went back upstairs to try to find them.

After searching for fifteen minutes, I resorted to my contacts.  I only wear those when we go out someplace REALLY special.  As I put them in I heard a knock at the front door.  The only one who usually comes THAT early is Sleeping Beauty, but having just seen her tweet about her lateness, knew that early knock could only mean trouble.

Someone  broke into The Mister’s car some point last night. 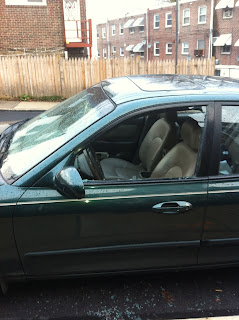 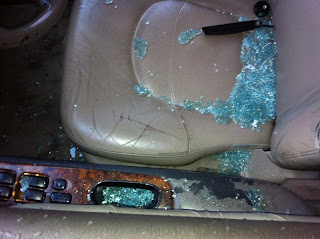 The Mister saved six months to get that radio.  In a smash of a window, it was gone. To add insult to injury, they only ripped out the faceplate.  Dumb Asses.

PSA: Regardless of how small, call 911!  That’s what the cops are there for.  My next door neighbor told me someone stole his rims from his van, but he never reported that incident.  Not that the call would have stopped our misfortune, but the police would now know there was a pattern of foolishness in our area and had additional patrols.

Back to the effed up day.

I tripped twice and one of the cats has gas. Eww.

We also had a stray cat in the garage who proceeded to spray every inch with his essence and now my house smells like a Hoarders home.

The evening didn’t get much better.  We went to Ms Tootsie’s Restaurant for dinner and got the slowest and craptastic service I had seen in some time.  Best believe I wrote a post about that.  The PPA stole my car, and the bus ride home was filled with two drunks arguing over who was going to bust the other’s head in first.  That set me on edge.  I started to chuckle then had a full on attack of the giggles.  That was the only thing that kept me crying: (At :10 you’ll hear what I played during the argument.  The Mister was NOT amused)

Eventually my glasses were located under the dresser, The Mister was able to get his car fixed relative;y cheap at Jack’s Auto Parts, we made it home in one piece and found my car in one piece.

I’m not superstitious, but the next Friday the 13th, I think I’ll stay my butt home.