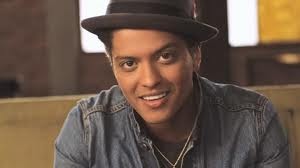 It’s his own fault.

Bruno Mars tweeted that a girl approached him and said he was good looking.  He replied like Bruno Mars and she said Ew, no!  His feelings were hurt.

Always one to root for the underdog, I googled him, found he had an album and downloaded a copy to iTunes.

Grenade was meh.  It’s touching that a guy would throw himself on an explosive device for my honor, but I’d rather you pay a bill or two.  Just saying.

Just the Way You Are…WOW!

Not since Babyface penned love songs in the nineties have I felt the tug in my soul that a song could transport me to a place where love is so finite, so endearing to one person.

I don’t think he’s bad looking.  And as long as he makes music, he definitely has my heart.  Ever since I saw La Bamba and the scene where Ritchie calls Donna on the phone to play the eponymous song to her, I secretly wanted a guy to sing to me just like that.  The Mister is tone death, so when I said I do, that went out the window.

Listening to his melodic voice, I have that scene for myself.