…In which I catch up on blogging after a hellified week.

First, The Grammys.  I wanted to do this post yesterday for Valentine’s Day, but I was doing some political stuff.  My only comment about politics: pretend for a moment you were’t raised in a barn and answer the door less rudely.  Usually I’m cold, my knees are protesting, and what I am doing is for YOUR benefit.

Anywho, The Boy and The Teen have taken to mocking me during various reality show viewings.  Beyond Scared Straight, Maury, Bad Girls Club, and Judge Judy usually find me calling them into the room to tell them that this (insert atrocious behavior here) is never acceptable and not tolerated in my house.  The kids usually finish my diatribe with my most repeated words “You better not do THAT”

Imagine my surprise when I saw that a whole article was dedicated to foolishness about Chris Brown.  When I originally talked with the kids about the incident with Rihanna, I never thought I would have to then repeat that domestic abuse whether verbally, mentally, physically is unacceptable.  Some of my fellow bloggers were rightly outraged about this article that culled tweets from people who would actually be cool with a Chris Brown Beat Down.

Why I weep for our youth…

I mislead you all when I said I wouldn’t talk anymore about politics.  This is just to say that anyone who believes we live in a post racial society is either in lala land or secluded in a cave.  I have never felt such hatred as the hate I felt going door to door to get signatures. As an African American Republican (I am NOT for Mitt the Git or Slick Rick.  Let me set THAT record straight), I expect mistreatment from those who believe I am a token or an Uncle Tom.  I’ve even been called “House” and had to explain to the kids what that meant and why I was so annoyed.

The doors I have knocked on belonged to Republicans who are mainly white.   I witnessed people actually peeking through their curtains, making eye contact, and STILL refusing to open the damn door. That was infuriating to say the least.  I don’t play the lottery so the dream of hitting a multi million Powerball is not happening; I have no rich, sick relatives to leave me their vast wealth; and The Mister isn’t Joe Millionaire.  Meaning with a kid on her way to college and another who wants to run track AND be the next Miles Davis, I’m pretty much settled in my house.  So when I walk door to door find out what the bleep I want before saying no.

In a nod to Wordless Wednesday, here’s a shot of Sleeping Beauty from high school: 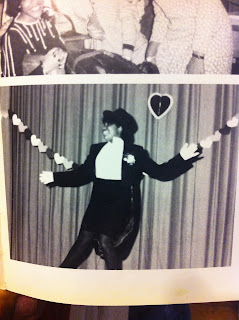